Here you can find articles about knives and knife related subjects

I have made some knives for a butcher in the Free State province,here is the statement he send me as well as some photos of his knife. Thank you for your loyal support mr Johan Boje. 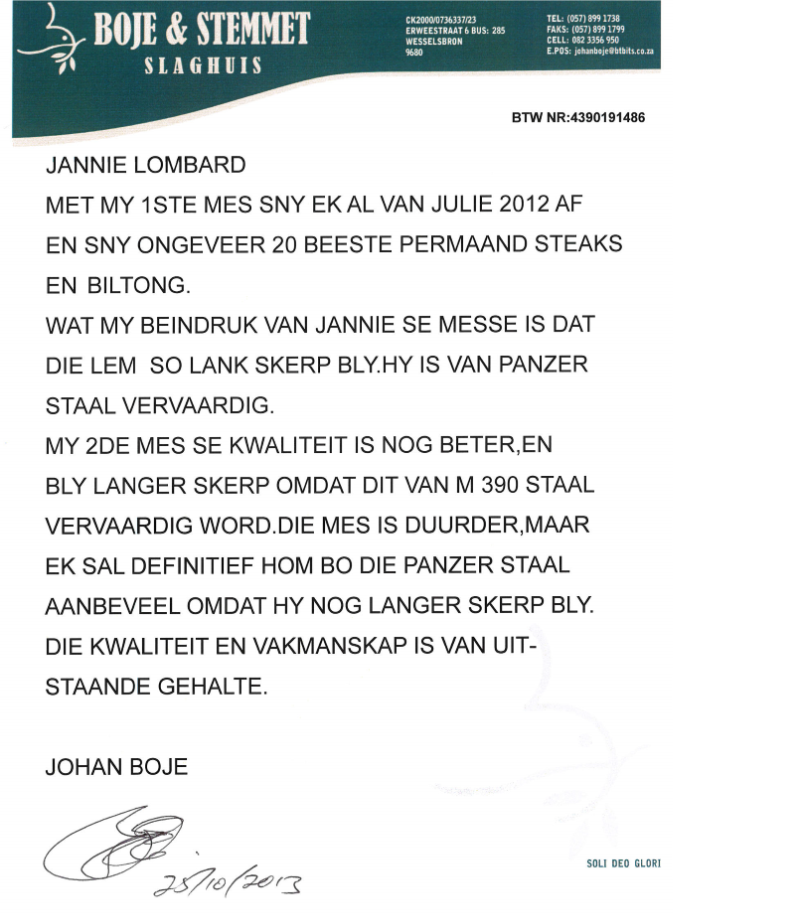 When Jannie Lombard started making knives in 2011, we used Sandvik’s 12C27, which is a fare steel for making knives. Since we have tried and tested a couple of stainless steels including Sandvik’s 14C28N and Böhler’s N690. After assessing the steel in both chemical composition and field use we adopted Böhler’s N690 as our standard knife making steel and came to the conclusion that our top knife making steel should be Böhler’s M390.

M390 is a martensitic chromium steel produced with powder metallurgy. In short a stainless powder steel. The chemical composition is listed below:
M390 is known for its exceptional wear resistance and corrosion resistance. This is exactly what we need in a knife!
From a knife makers point of view, M390 is extremely hard to work with. But the reward is even better.
In 2012 Mr Johan Boje, a butcher from Wesselsbron in the Free State, required a good reliable butchers knife. Jannie made the Boje Butchers knife out of Panzer 36(N690), which proved itself as a very reliable and tough knife steel surpassing its 12C27 counterpart by far.
A year later, Jannie made another knife, the Boje Steak Knife, out of M390 and asked Mr Boje to try it out and provide us with some feedback on the quality and durability of M390.
Mr. Boje, processing about 20 cattle carcasses a month, stated that after two months the knife was still razor sharp without him needing to sharpen the blade(only removing the bur once a while).
A special thanks to Mr Johan Boje for the design of the two knives as well as giving us the opportunity to put them through real scenario tests in a work environment. Your support is much appreciated.